American in All Ways But Paper

America made a deal with young immigrants brought to this country, and should honor it.

Nearly 750,000 young people without papers were beckoned out of the shadows by the promise of a presidential act – the Deferred Action for Childhood Arrivals, known as DACA, first offered in 2012. After two decades of failed attempts to fix our broken immigration system, DACA would minimally address the needs of young people brought to this country as children, not of their own volition… Continue reading here 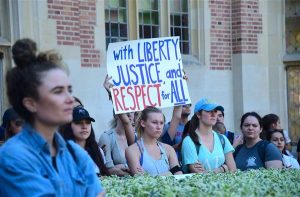 One of the nation’s largest public university systems announced a set of sweeping measures to protect undocumented students.

The University of California school system and its police departments stated it will not assist law enforcement in immigration efforts against students who lack legal status… Click here to continue reading.